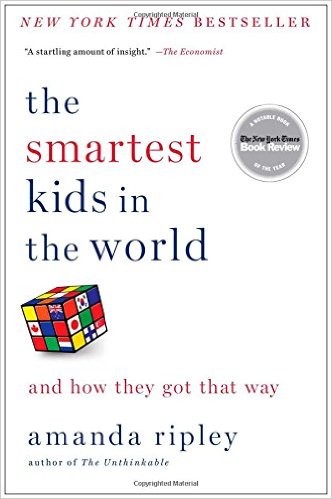 Why in this day and age in America, are our most privileged teenagers performing below affluent teenagers in 27 different countries in math?  Amanda Ripley examines this question and more in her 2013 New York Times best seller The Smartest Kids in the World – And How They Got That Way.

Ripley engages immediately by introducing three American students as they prepare to embark on a life changing year abroad studying in Finland, Poland, and South Korea – three countries whose young people have recently made huge gains in education.  Weaving educational statistics as the story of these students’ lives unfold, Ripley presents a stark contrast between the educational system in America and these three successful countries.

As an educator, I found the book fascinating and informative, and several points stood out to me.  The first involved Asian vs. American parenting, and why there is such a disparity in their learning/test scores.  Ripley found that what parents did at home mattered much more than what parents did at school.  American parents tended to be more involved in matters of their children’s school, such as volunteering, PTA, etc.  In addition, despite a lack of evidence, the self-esteem movement of the 80’s and 90’s did much to hinder learning for American kids.  American parents suspected that a child was fragile and needed to be “protected from competition (and reality)”.  Not wanting to rob their children of the joys of childhood, they bought their kids placemats with numbers and ABC blocks and called it a day.  When polled 85% of America parents believed that praising a child’s intelligence was very important.  However, research showed that praise that is excessive, vague, or insincere tended to have the opposite effect:  discouraging hard work and effort.  Praise must be authentic, specific, and rare.

Asian parents, in contrast, acted like coaches.  They taught their kids systematically how to add or subtract, practiced times tables with them, and read to them.  Rather than coddle their children, they pushed them to try harder.  They viewed educating their children as one of their jobs.  Subsequently, they scored higher on international tests.  Research shows that American/European kids scored higher, as well, when taught this way.

The second point highlights the importance of reading to children when they are young.  Kids who were read to on a daily and/or weekly basis gained a full year on their peers on international test scores by the time they were 15 years old!  In addition, kids whose parents read for pleasure at home were more likely to enjoy reading, too.  “Kids could see what parents valued and it mattered more than what parents said.”

The third interesting point was a piece of advice given by the author regarding fancy schools with the latest and greatest technology:  ignore shiny objects.  Ripley found that Finland, Poland, and South Korea had bland schools and very little technology compared to the United States.  One high school she visited in South Korea had a very simple classroom with antiquated computers labs.  The high school in Finland looked like a school from the 1950’s.  The school in Poland had no interactive white boards, no state of the art theater…not even a cafeteria!  In contrast, all of the American high schools were equipped with the latest technology:  smart boards, the latest MacBooks, wireless clickers for instant polling, etc.  While there’s little data comparing educational technology by country, the anecdotal evidence suggests, “Americans waste an extraordinary amount of tax money on high tech toys for teachers and students, most of which have no proven learning value whatsoever”.  It appears that the educational systems in these successful countries place their emphasis on impactful teaching practices rather than the latest technology.

The Smartest Kids in the World is an eye-opening look at the current state of education in the United States and abroad.  The stories give us a glimpse into what’s working at the best schools in the world, and some insight into what we could do better as a country to educate our youth.  Definitely a must-read for parents and teachers!